The Aviation Restructure Initiative was approved by Army Chief of Staff Gen. Raymond T. Odierno in December 2014, and aimed to reduce the costs of the Army’s operations. However, many Army officials are saying the cuts have been too steep, and may threaten operation readiness.

“USAREUR has kind of validated it in our minds – we need a whole lot more than that, and so we are going to ask for it,” Waters added. 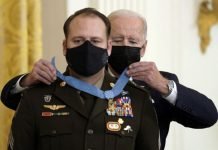