Sept. 15 (UPI) — Ukrainian President Volodymyr Zelensky said on Wednesday that his country is moving in the right direction, “toward victory,” following a highly successful counteroffensive this month that has retaken thousands of square miles of territory from Russian forces.

Zelensky made the remarks during a surprise trip to the northeastern city of Izyum, just days after Ukrainian forces recaptured the Russian-held city.

“We are moving in only one direction — forward and towards victory,” Zelensky said according to CNBC.

Zelensky and other officials say that Ukraine‘s military has retaken more than 3,000 square miles of territory from Russia since the start of September. The gains are a result of surprisingly effective counteroffensive operations in northeastern and southern Ukraine.

Some have said the recent Ukrainian successes might signal a key turning point of the war, which has been going since February. But whether it proves in the end to be an important pivot depends entirely on Ukraine continuing to retake land and drive Russian troops back. Russian President Vladimir Putin has given no indication that he plans to withdraw from Ukraine.

“Our blue-yellow flag is already flying in the once occupied Izyum,” Zelensky said according to The Guardian. “And it will be so in every Ukrainian city and village.”

Russian forces used the city of Izyum as a hub to launch attacks into the Donetsk region and Kupyansk. It was also an important rail hub to resupply Russian troops.

Zelensky was involved in a minor car crash while back in Kyiv later Wednesday, the president’s press secretary, Sergii Nykyforov, said in a statement.

“The president was examined by a doctor, no serious injuries were found,” he said.

The driver of the car that collided with the president’s motorcade was treated at the scene and transported away from the scene in an ambulance.

Nykyforov said all circumstances of the crash were under investigation.

Meanwhile, Ukrainian energy company Ukrenergo said that two high power lines that were damaged by fighting in Kharkiv had been restored.

The cut power lines caused widespread blackouts in the city, which is Ukraine’s second-largest after Kyiv. Russia has been fighting for Kharkiv since the war began, but Ukrainian forces have succeeded in holding onto the key area. 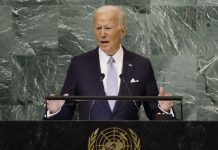