NOGALES, Ariz., Aug. 16 (Doug G. Ware) — For the first time since announcing his formal candidacy, Republican Donald Trump on Sunday issued a position paper — a written plan that outlines the specifics of a political strategy — and it should probably surprise no one that it was immigration-centric.

The outspoken New York City real estate mogul, perhaps, has spoken about no other topic more in the last few months. In fact, his pro-border security ideology landed him in treacherous territory a few weeks ago when he labeled many Mexican migrants as“rapists” and “criminals.”

Many observers have pressed Trump for specifics since then. Sunday, he obliged.

Titled “Immigration Reform That Will Make America Great Again,” the document outlines a three-point strategy to fortify the U.S.-Mexico border and allow immigrants to enter through legal channels. In its opening paragraph, it criticized a recent proposal by senators Chuck Schumer, D-N.Y., and fellow Republican Marco Rubio, R-Fla., as nothing more than an effort to reform immigration strictly out of capitalist needs.

The first point of the plan is simple: maintain a wall between the U.S. and Mexico. The second mandates strict enforcement of the law and the third demands that the interests of the citizens of the United States must be priority one.

“For many years, Mexico’s leaders have been taking advantage of the United States by using illegal immigration to export the crime and poverty … They have even published pamphlets on how to illegally immigrate to the United States,” Trump’s plan says, stating that Americans have been harmed by past and present policies.

“the Mexican government has taken the United States to the cleaners. They are responsible for this problem, and they must help pay to clean it up,” he continues, arguing that as president he would force Mexico to help pay for the border wall. “Mexico must pay for the wall.”

Perhaps the most important element of Trump’s plan is a step to revoke “birthright citizenship” — the stipulation that children born in the United States are automatically American citizens. Trump said he believes that is the driving force that motivates illegal immigrants to head north.

“What they are doing, they are having a baby and all of a sudden, nobody knows … the baby’s here,” Trump said on NBC’s Meet the Press Sunday.

Trump’s third point, putting Americans first, contains multiple goals — including the raising of wages, a law requiring U.S. citizens be given first choice at jobs given to immigrants, and the end of welfare abuse. Trump’s plan would require that every immigrant that comes to the United States would be able to financially support themselves here — with zero government assistance.

“We are going to keep the families together, but [illegal immigrants] have to go,” Trump told Meet the Press host Chuck Todd. “We will work with them. They have to go. Chuck, we either have a country, or we don’t have a country.” 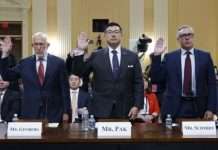