WEST VALLEY CITY, Utah, Jan. 5, 2018 (Gephardt Daily) — A man with a gun robbed a Jiffy Lube and stole an employee’s purse in the process Friday night, leaving the woman shaken and in tears.

“A male, either white or Hispanic, came up to an employee as she was locking up, took her inside, and stole a couple hundred dollars (from the store) and her purse,” Burke said.

After the suspect got the cash and the woman’s purse, he left through the pit area in the back of the business.

A K-9 was brought in, and the dog tracked the suspect to “a gap in the fence at La Frontera (Cafe) on the corner and the apartments to the north,” Burke said.

The dog lost the scent at that point, and police believe the suspect slipped through the break in the fence and got into a vehicle.

When asked if the man could have been a former employee who knew his way around the premises, Burke said that’s a possibility, but, “We’re not sure why he went out that route.”

Burke said the female employee wasn’t injured, but “she was really shaken up … obviously had been crying and was very upset … (The suspect) had a gun and showed it to her. I don’t believe he actually pointed it at her. He just kind of lifted it out of his waistband and then tucked it back in.”

Police will be viewing video from Jiffy Lube and surrounding businesses, Burke said, adding, “We’ll see if anything turns up if anyone in the nearby apartments witnessed anything.” 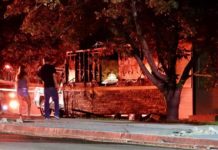