The move quashed an effort by Senate Democratic leader Chuck Schumer of New York to match a resolution the House passed unanimously March 14. The measure seeks to make the entire report public.

Speaking from the Senate floor, McConnell said though that Attorney General William Barr should be allowed to work with special counsel Mueller on redacting secret grand jury material and any content related to ongoing investigations before it’s made public.

“It’s not unreasonable to give the special counsel and the Justice Department just a little time to complete their review in a professional and responsible manner,” McConnell said. “Remember, as I said earlier, we’re likely dealing here with potential other prosecutions, classified information, damaging people’s reputation. There’s no evidence that the attorney general is not going to produce as much information as possible for all of us, and that’s why I objected. I think it’s a reasonable thing to do.”

In response, Schumer asked what Republicans are trying to hide.

“It is in the public interest for the Mueller report to be released to the American people,” Schumer wrote on Twitter. “They simply want the truth. They can read the report for themselves and draw their own conclusions.”

Graham, the Senate judiciary committee chairman, said he would speak with Barr about “next steps.”

Barr said the report indicated that neither President Donald Trump nor his aides coordinated with the Kremlin. Quoting from the report, Barr added that on the subject of obstruction, “while this report does not conclude that the president committed a crime, it also does not exonerate him.”

Trump later said on Twitter that he was exonerated of collusion and obstruction of justice allegations.

“What’s next I hope is that [Barr] come to the committee, release as much as possible of the Mueller report,” Graham said Monday. “I thought Mr. Mueller was not on a witch hunt and that Mr. Mueller was highly qualified” to undertake the investigation. Graham spent the weekend in Florida with Trump, and said his committee will examine Justice Department actions in the Russia investigation.

Graham added that it will remain up to Barr if Mueller will testify before the Senate judiciary committee.

“In light of the very concerning discrepancies and final decision-making at the Justice Department following the special counsel report, where Mueller did not exonerate the president, we will be calling Attorney General Barr in to testify before House Judiciary in the near future,” Nadler, D-N.Y., said in a tweet Sunday.

Trump said he hasn’t considered whether to pardon any of his former aides who were targeted by the Mueller probe.

“Haven’t thought about it,” he told reporters in the Oval Office. 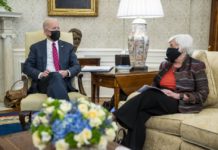