The Mesquite Police Department said an off-duty officer working security at an amateur rodeo event at the Mesquite Championship Rodeo arena called for backup about 9 p.m. Sunday after a fight broke out.

Officers arrived and arrested one man while two others fled the scene on horseback, police spokesman Lt. Brian Parrish said.

“I bet they thought, ‘There are police here, and we’re drunk, and we don’t want to go to jail, and there are horses here.’ So they got on the horses and left. It’s that simple,” Parrish told KXAS-TV. “I think the main contributing factor in all of this was their level of intoxication. The horses were the only form of transportation they had available.”

A Mesquite officer spotted the men in a nearby neighborhood and turned on the patrol car’s red and blue lights, leading one of the suspects to turn around, get down from his horse and surrender.

The other suspect continued to flee, eventually putting his mount into a full gallop.

“I think being on horseback and trying to evade police gives you somewhat of a small advantage. You’re not going to have a whole lot of officers that’ll keep up with you in their car, or on foot. But we didn’t give up,” Parrish said.

The man was later found on foot after having stashed his horse in a back yard. The man, later identified as Francisco Torres, 33, allegedly resisted arrest.

“He didn’t want to cooperate and was Tased,” Parrish told WFAA-TV.

Torres was arrested and charged with evading arrest, disorderly conduct, failure to identify himself and public intoxication.

The rider who earlier surrendered to police, Aaron Ibarra, 27, was cited for public intoxication and disorderly conduct.

Macario Andrade, 31, the man arrested at the rodeo, was charged with  resisting arrest, disorderly conduct and public intoxication. 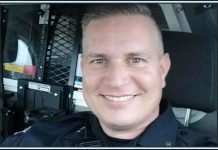