CLINTON, Utah, May 27, 2018 (Gephardt Daily) — Police from multiple jurisdictions responded to a house in Davis County on Sunday, trying to make contact with an armed domestic violence suspect believed to be inside.

The suspect was taken into custody shortly before 8 p.m.

Roy Police Department Officer Stuart Hackworth told Gephardt Daily the man was found hiding in a shed on the property, near 2800 West and 2300 North.

Officers deployed tear gas, and the man was taken into custody without incident. He was treated on scene for exposure to the tear gas but was otherwise not injured.

Police are not releasing the suspect’s name at this time.

Hackworth said the incident began with a domestic violence situation in West Haven in Weber County at about 11 a.m. Sunday.

The male suspect and his wife are separated.

The situation then moved to a home in Roy, where a weapon was involved.

Hackworth said the suspect fired a shot from a gun, but no one was hit. Minor injuries were sustained, however, during a physical altercation.

Hackworth added that children were in the home at the time.

The suspect left the Roy home before police arrived, and went to the home in Clinton. 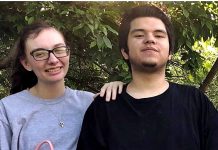