Battalion Chief Robbie Asbell, Orem platoon A, said crews were called to the scene, at 44 N. Garden Park Drive, at about 3:15 a.m.

“The apartment was fully in flames that had begun to move up into the attic space,” Asbell told Gephardt Daily.

“We sent a crew inside, and we had an outside crew, but within four or five minutes, the fire had blown out both sides of the attic space. We got our crews out and went defensive on the fire.”

All residents made it out safely, Asbell said. Crews from the Orem City Fire Department were assisted by crews and engines from Provo and Pleasant Grove.

Other Stories of Interest:  Orem police on scene of fatal auto-pedestrian crash

The fire was “one of those beasts that gets up into the attic, and you’re trying to put it out as good as you can, but the ladder trucks can only reach some areas.”

Units that weren’t destroyed by fire were badly damaged by hours of water applied to bring the fire under control, Asbell said, adding that a rough damage estimate would be $4 million.

The fire was mostly knocked down within the first couple hours, he said, and some crews were released at about 6 a.m. As of 11:30 a.m., Orem still had crews on the scene, dousing hot spots, Asbell said.

No firefighters or residents were injured, he said. The Red Cross was called to the scene early on, Asbell said, and was helping residents make arrangements for places to stay. 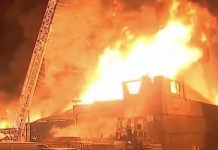