More from the #knollsfire. Video credit: Deputy Haymond. Our condolences to everyone that is dealing with this tonight. pic.twitter.com/zUtA1N6mbf

SARATOGA SPRINGS, Utah, June 28, 2020 (Gephardt Daily) — The Knolls Fire near Saratoga Springs, which broke out Sunday afternoon on the east side of Lake Mountain, is still burning out of control, officials said Sunday evening.

Mandatory evacuations were quickly ordered, with officials getting the word out on social media, via reverse 911, and going from door to door in some cases.

In a news briefing early Sunday evening, officials said that some homes have sustained minor damage, but none have been destroyed.

All residents south of Grandview Boulevard on the west side of Redwood Road were urged to evacuate, and a shelter has been set up at Westlake High School, at 99 N. 200 West, in Saratoga Springs.

About one-third of Saratoga Springs residents have been evacuated.

Officials said in the briefing that if it is determined more room is needed for shelter, they will work with the school district, but for now there is no need, as many residents are staying with family members in other locations.

They also urged everyone to let authorities know if anyone, such as an elderly or vulnerable adult, is still at home, and help will be sent to get them to safety.

Anyone who has already evacuated needs to understand that it isn’t worth going home to get anything they may have forgotten, they said.

Dozens of engines from multiple agencies have responded to the fire, including Unified Fire Authority, Utah County, and Saratoga Springs.

The gusting wind has been driving and feeding the fire with oxygen since it first sparked. Aircraft have been grounded because of the wind, making the firefighting effort extremely challenging, and it’s likely that crews won’t be able to resume operations until Monday morning, officials said.

Road closures are in place on Redwood Road going south, and everyone is being warned to stay away from the area.

At 10:45 p.m. Sunday, Saratoga Springs tweeted: Some evacuated residents may return to their homes, but are still under evacuation warning, dependent of the status of the fire. Please be patient and respectful to those managing the road closures. See map below. 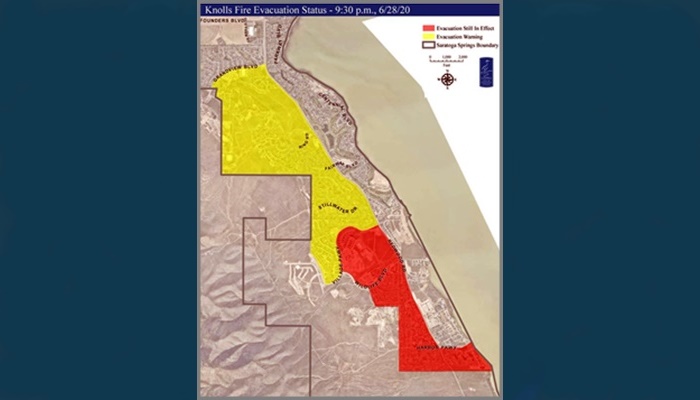 Fire managers preparing structure protection in south Saratoga Springs in the path of the #knollsFire pic.twitter.com/wbSE6yvC3P 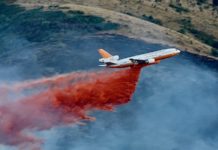