BOSTON, Oct. 6 (UPI) — Millennials who graduate from college with overwhelming student loan debt are increasingly looking to an usual place to drive down the financial burden: their employers.

Enter Gradifi, a recently launched platform that makes paying off student debt a joint effort between employers and employees. The Boston-based technology company created a program that allows employers to directly and securely make deposits into their employee’s student loan accounts.

With about 100 companies already enlisted to launch Gradifi in 2016, Founder and CEO Tim DeMello sees it as the wave of the future. It is to student loans what the 401k is to retirement plans.

“Today’s issue is really the millennials saying retirement is great, but my take-home pay is $3,000 a month and I spend $600 on student loans,” DeMello said.

About 43 million Americans owe an estimated $1.2 trillion in student loan debt. Of that, about $103 billion is in default. Many graduates owe an average of $30,000 and say they can’t afford the high monthly payments. Others have opted not to pay as a form of protest.

Since Gradifi launched its Student Loan Paydown Program, it has enlisted companies ranging from a 150-person advertising agency to a 200,000-person consulting firm. In September, accounting and consulting giant Pricewaterhouse Coopers was the first to announce it will pay up to $1,200 a year to help some employees pay down student loans using Gradifi.

“The marketplace for talent is really competitive. This is an important part of the benefits package to help us attract talent,” Robert Gittings, PwC’s vice chairman of client services, said.

Already, the model of employers helping with employee student loans is working. When Simplycast, a Canadian-based tech company, offered to pay down employees’ student loans, there was a marked uptick in applicants.

“When I did a search around the globe to see if anyone was actually paying student loans after graduation, I was surprised that no one has,” Simplycast President Saeed El-Darahali said. “I said, ‘Maybe this might be a great opportunity that a private corporation can take some of their wealth and provide it back to their most important asset, their employees.’ “ 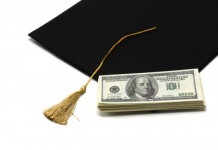