ST. LOUIS, Feb. 24 (UPI) — Johnson & Johnson was ordered to pay $72 million in damages to the family of a woman who said her ovarian cancer was caused by talc in its products.

The St. Louis District Court awarded $10 million Monday in actual damages and $62 million in punitive damages to the family of Jacqueline Fox, 62, of Birmingham, Ala. Fox was a lifelong Johnson & Johnson powder user, and her family said in court the company knew the possible risks of using products containing talc, including talcum powder, but offered no warning to consumers.

Talc is a mineral used to absorb moisture in many cosmetic products. The Fox family’s lawyers presented studies in court they said demonstrated the link between talc and ovarian cancer. Other studies say the evidence is too weak to make the connection.

The American Cancer Society says it is not clear if products containing increase the risk of cancer, but the International Agency for Research on Cancer, an office of the World Health Organization, classifies talc as “possibly carcinogenic to humans.”

Johnson & Johnson issued a statement opposing the verdict, saying it “goes against decades of sound science proving the safety of talc as a cosmetic ingredient in multiple products.” An appeal is expected.

Fox died in 2015, nearly three years after she was diagnosed. Her son, Marvin Slater, became the plaintiff in the suit, one of nearly 50 brought against Johnson & Johnson, after her death. The trial, nearly three weeks long, ended with 10 jurors voting in favor of the plaintiff, and two against.

After the trial, juror Jerome Kendrick said the company’s internal memos, presented in the trial, “pretty much sealed my opinion.”

“They tried to cover up and influence the boards that regulate cosmetics. They could have at least put a warning label on the box but they didn’t. They did nothing.”

Products containing talc are classified as cosmetics and do not undergo U.S. Federal Drug Administration review, but “must be safe for use by consumers under labeled or customary conditions of use” and properly labeled, the FDA states. 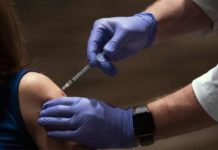 Johnson & Johnson vaccine clinic to be held in Moab Thursday