Mattel, which manufactures Barbie, unveiled a special edition doll in the 31-year-old Olympic fencer’s likeness Tuesday as the latest addition to its Sheroes collection.

“We are so excited to honor @IbtihajMuhammad with a one-of-a-kind #Barbie doll! Ibtihaj continues to inspire women and girls everywhere to break boundaries. #Shero #YouCanBeAnything @GlamourWOTY,” the Barbie official Twitter account wrote.

Muhammad became the first Muslim American women to wear a hijab while competing for the United States at the 2016 Summer Olympics in Rio. Her doll is depicted wearing a white hijab and fencing uniform.

“Thank you @Mattel for announcing me as the newest member of the @Barbie Shero family!” the athlete captioned a photo on Instagram of herself with the toy.

“The Barbie Shero program recognizes women who break boundaries to inspire the next generation of girls and I am so excited to join this incredible group of women,” she said. “I’m proud to know that little girls everywhere can now play with a Barbie who chooses to wear hijab! This is a childhood dream come true #shero.” 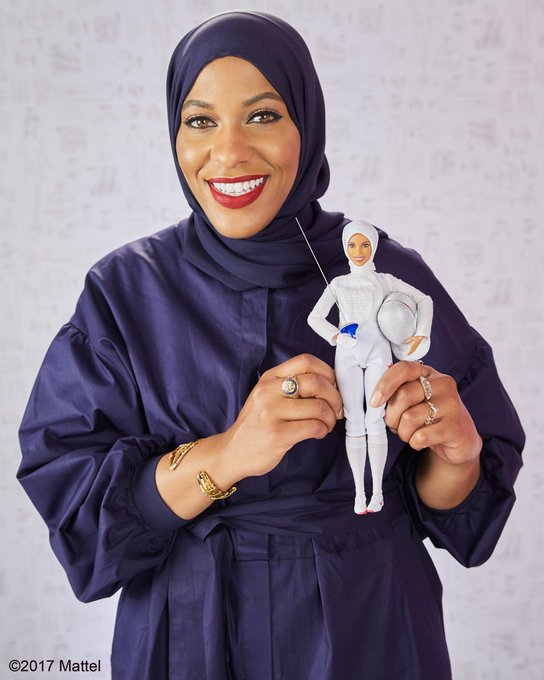 We are so excited to honor @IbtihajMuhammad with a one-of-a-kind #Barbie doll! Ibtihaj continues to inspire women and girls everywhere to break boundaries. #Shero #YouCanBeAnything#GlamourWOTY