LOS ANGELES, Dec. 31 (UPI) — About 100 people — many of them members of the press — attended Friday’s funeral mass for actress and socialite Zsa Zsa Gabor at the Church of the Good Shepherd in Beverly Hills.

Gabor died Dec. 18 at the age of 99 after years of declining health.

The Hollywood Reporter said her ashes, which were contained in a gold box and surrounded by roses, sat on a table as her ninth husband Frédéric Prinz von Anhalt spoke for more than 40 minutes about his life with his wife of more than 30 years.

Among the mourners at the church were reality TV personality Bobby Trendy, actress Kate Linder and actor Jason Stuart.

“Lots of people she outlived, so most of her friends aren’t here anymore anyhow. And other friends, they went on vacations. Colorado, Acapulco, to have a good time,” THR quoted von Anhalt as saying about why more famous people were not present at the service.

The grieving husband also said during his lengthy eulogy he is pleased Gabor was immortalized with a star on the Hollywood Walk of Fame.

“She will never be forgotten because she has her Hollywood star,” The Los Angeles Times reported von Anhalt said. “It will always be Zsa Zsa Gabor. It will never end.”

“She epitomized and personified Hollywood glamour,” agreed Father Edward Benioff, the only other person to speak at Gabor’s funeral. “She could write. She could act. She had many, many talents.” 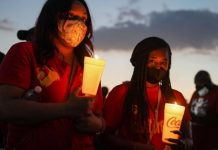 George Floyd to be buried Tuesday next to mother in Houston 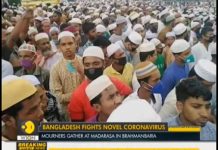 More than 100,000 attend mass funeral for Muslim cleric in Bangladesh 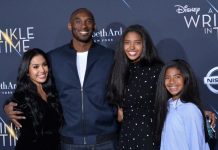