The 51-year-old star attended the Toronto International Film Festival premiere of her movie “Kings” at Roy Thomson Hall on Wednesday.

Berry dazzled in a Zuhair Murad jumpsuit featuring floral embroidery and lace. She emphasized the plunging neckline by wearing her hair in a high, braided ponytail, and accessorized with several D’Oraizo rings.

Berry showed off the back of her look in a Boomerang video on Instagram prior the premiere. The clip shows the actress looking out at the Toronto, Canada, skyline.

“Soaring over Toronto for TIFF #KingsMovie #TIFF17,” she wrote.

Berry was joined on the red carpet by “Kings” director Deniz Gamze Ergüven and co-stars Lamar Johnson and Reece Cody. The movie stars Berry as a working-class foster mom during the 1992 Los Angeles riots.

“Well, playing the mother of eight foster kids — definitely being a mom — informed every choice I made for the character, every moment,” the actress told reporters at the premiere.

“There’s a scene where I kiss all the kids’ little feet,” she shared. “I’ve done that 100 times with my own kids so there’s a knowing what that feeling is all about.”

Kings co-stars Daniel Craig, and has yet to set a theatrical release date. 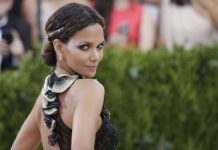 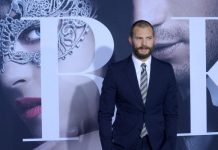 Jamie Dornan, Halle Berry to be presenters at the Oscars