June 21 (UPI) — Janet Jackson has found “the height of happiness” with son Eissa.

The 52-year-old singer said in the July issue of Essence that motherhood was a source of newfound joy after struggling with depression for years.

“The height of happiness is holding my baby son in my arms and hearing him coo, or when I look into his smiling eyes and watch him respond to my tenderness,” Jackson told the magazine.

“When I kiss him. When I sing him softly to sleep. During those sacred times, happiness is everywhere,” she said. “Happiness is in gratitude to God. Happiness is saying, ‘Thank you, God, for my life, my energy and my capacity to grow in love.'”

Jackson recounted her “intense” struggle with depression in her thirties and said happiness remained “elusive” in her forties.

“Like millions of women in the world, I still heard voices inside my head berating me, voices questioning my value,” the star recalled.

Jackson split from husband Wissam Al Mana in April 2017 after giving birth to Eissa that January. She said in the May 19 issue of Billboard that motherhood has given her a sense of peace.

“Day after day and night after night, holding my baby in my arms, I am at peace. I am blessed. I feel bliss,” the star said. “In those moments, all is right with the world.” 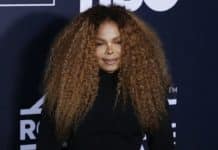