Aizzo made a brief appearance during the virtual call to express her enthusiasm for the deal.

“I’m so excited to partner with the amazing team at Amazon,” Lizzo said. “Thank you to Jen Salke and the rest of the team for making this dream come true. I can’t wait to get started and share my vision with the world.”

The deal was welcomed by Salke, head of Amazon Studios.

“Lizzo is one of the most exciting, creative, joyful artists in the industry, and it is such a pleasure to announce this new deal with her,” Salke said. “She has such a unique perspective and we’re so excited to hear her ideas for new content that our Prime Video customers are sure to love.”

The deal marks the first foray into TV for the Grammy-winning “Good as Hell” and “Juice” singer, who previously starred in the movie “Hustlers” and voiced a character in animated film “UglyDolls.” 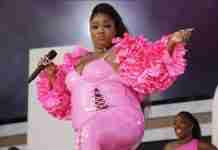