Oct. 19 (UPI) — Naomi Campbell remains dedicated to advocating for Black models, more than 30 years into her career in the fashion industry.

The 50-year-old model discussed in the November issue of Vogue how her commitment to speaking out against racism and other injustices hasn’t changed over the years.

While Campbell’s dedication hasn’t wavered, she said more people have started to speak out and bring awareness to issues in the fashion industry.

“I never used to say the word racism; I just used to say, it’s territorialism,” Campbell said. “I never wanted people to say that I used that as an excuse, that I was throwing that word out.”

“Now I’m happy that everyone’s all on the same page, that everyone feels comfortable to come out about their experiences without feeling some stigma,” she added. “But for me, nothing’s changed. I’m going to speak the same way.”

Campbell also discussed her battles with the press and fighting the narrative of the “angry Black woman.”

“I am quite over it,” she said. “Is it now that we have permission to speak? Well, I have always spoken.”

Campbell did say she speaks with greater intentionality today.

“There were a few things that I would do when I was younger that I was told were bad for my race,” she said. “Now the things I do are not just for me anymore. I think more of my culture and my race, as opposed to thinking about just me.”

Campbell will revisit her early career as a model in the new Apple TV+ docuseries “The Supermodels.” The series explores the iconic modeling careers of Campbell, Cindy Crawford, Linda Evangelista and Christy Turlington.

In the Vogue interview, Campbell said the series was “really worth holding out” for.

“If we are going to do something, we are going to be involved in it throughout the whole process, from beginning to end,” she said. “Linda, Christy, and Cindy, these are my sisters. The four of us tell it. I wasn’t going to do it any other way.” 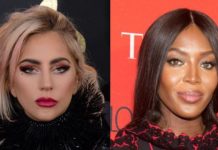