Kelly, 52, appeared before Judge John Lyke Jr in his first court appearance since his arrest Friday. He will have to pay $100,000, surrender his passport and not contact anyone under 18 to be released from the Cook County Jail ahead of the trial.

The next court date was scheduled for Monday.

Kelly, whose full name is Robert Sylvester Kelly, surrendered to police Friday and was jailed overnight before the bond hearing.

Assistant State’s Attorney Jennifer Gonzalez read off evidence against him in four separate cases between 1998 and 2010. The Chicago-born R&B superstar wore a black hoodie and jeans as he stared at the ground in the Leighton Criminal Court Building.

In the four separate cases, Kelly is charged with 10 counts of aggravated criminal sexual abuse. He is accused of using force or the threat of force.

In the current case, three children were older than 13 but younger than 17. There is no age range listed for one of the alleged victims.

Kelly’s attorney, Steve Greenberg, said the charges in one of the cases involve the same woman who was named as the victim in the 2002 child pornography indictment.

“I think all the women are lying,” attorney Steve Greenberg said Friday. “Mr. Kelly is strong, he’s got a lot of support and he’s going to be vindicated on all these charges — one by one if it has to be.”

In January, a docuseries called “Surviving R. Kelly” on Lifetime television included women who said they were kept in abusive sexual relationships with the music artist.

“Everything in that documentary was a rehash of things they’ve known for years,” Greenberg said. “The police have investigated, the prosecutors investigated. The jury heard, and everybody rejected it.” 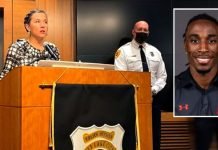