The stuntman — full name Stephen Glover — was charged with five misdemeanors including creating a false emergency, trespassing, possessing and using fireworks without permit and conspiracy to commit a crime, Los Angeles Times reports.

On Aug. 9, Glover, 41, walked across an escalated crane, hung an inflatable Orca donning an anti-SeaWorld message and reportedly shot off multiple fireworks.

Over 80 firefighters and 30 LAPD officers responded to the scene. Glover was arrested upon his decent, but before reaching the ground the TV and film personality posted “Anyone wanna bail me out of jail?” on his Facebook page.

Glover may face a year and a half of jail time and a $1.500 fine; if convicted on all five counts, he may face even more. The Times reports if Glover is convicted, he may also have to pay restitution fees to police, firefighters and the owner of the property into which he allegedly trespassed.

“We are currently working with LAPD, LAFD and the owner of the construction site to determine the exact amount,” an Los Angeles Fire Department spokeswoman told the San Diego Times.

Glover is reportedly scheduled to be arraigned on the last day of August. 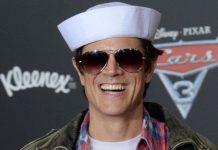 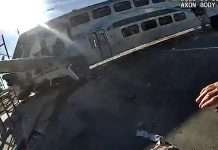 Video: L.A. cops save downed pilot as speeding train bears down on wreckage