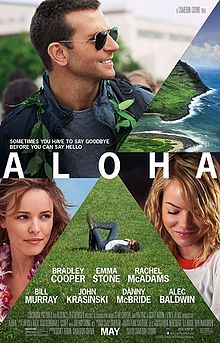 “Aloha” stars Bradley Cooper, Emma Stone and Rachel McAdams in this new romantic comedy about a celebrated military contractor returning to the site of his greatest career triumphs – the US Space program in Honolulu. He reconnects with a long-ago love but unexpectedly falls for the gung-ho Air Force assistant assigned to him.
The film and its writer / director Cameron Crowe have been under fire for the film’s alleged lack of character diversity and respect for Hawaiian culture.
I am pretty sure Sony Pictures is welcoming any controversy surrounding “Aloha,” hoping it might increase interest in the film and sell a few more tickets.
The truth is “Aloha” is a predictable rom/com that, even with a stellar cast, ends up as a monotonous and pedestrian mess. Although there were a couple of “nice” moments, nothing in the movie was memorable or truly engaging.
“Aloha” is barely average and deserves a C-. It’s rated PG-13

“San Andreas” tells the story of a chopper pilot’s search for his missing daughter in the aftermath of a massive earthquake in California.

Ok, I agree the plot is stretched thinner than Dr Phil’s jogging suit, but disaster movies are the cinematic equivalent to roller coasters, meant to be ridden for the fun of it. “Earthquake,” “The Towering Inferno,” “Volcano,” “Airport” and in recent years; “The Day After Tomorrow,” “2012” and yes and even “Sharknado” are made for the thrill and the fun.

Look, it’s easy to nit-pick a film made to just entertain, it’s like watching a cartoon and then afterwards complaining that the coyote should have died when the boulder hit him on the head.

Some movies are made just to have some fun. So, here’s my advice, if you like disaster films, like I do – then leave all your “logic” at home… buy a big tub of popcorn and enjoy the ride.