SPRINGVILLE, Utah, Oct. 31, 2018 (Gephardt Daily) — Two people were arrested in Springville Tuesday night after one man was shot in the foot when a pistol went off as another man was being hit in the head with it.

A news release from Springville Police Department said officers were dispatched to a report of a gunshot in the Brookside area of Springville at approximately 10 p.m.

When all the occupants were removed from the vehicle, officers were told two of the people in the car were injured, the news release said. One man had a head injury and another man had been shot. Medical personnel were called to the location of the stop and the two men were eventually transported to the hospital with non life-threatening injuries.

“Everyone in the vehicle was brought to the police department for questioning,” the news release goes on.

“Officers were able to piece together the sequence of events that led up to the traffic stop. All the people who were in the vehicle were at the residence to move some property out of the home where the gunshot victim and his girlfriend lived.”

While they were at the home there was a confrontation between the gunshot victim and his girlfriend’s brother, Eli Edwards, the news release said. As they were arguing, the homeowner, Justin Jenkins, 61, came out of the house with a gun in his hand. Jenkins struck a 21-year-old man in the head with the pistol. As Jenkins was hitting the young man in the head the gun went off and the bullet hit another man in the foot.

“When the gun went off, seven people, including the two injured, ran to one car and left the area at a high rate of speed and were eventually stopped by officers,” the news release said. 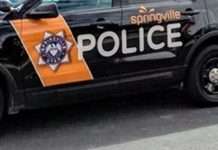