SANDY, Utah, Feb. 3, 2018 (Gephardt Daily) — Three Sandy residents have been displaced after a fire damaged their house and garage, and destroyed two cars on Saturday.

“One of the females saw the smoke and yelled down to the basement, and got the other female out,” Battalion Chief Chris Dawson, Sandy Fire Department, told Gephardt Daily.

“The male did not hear, but some neighbors banged on the door and were able to wake him up.”

No firefighters or residents were hurt in the incident. The fire began in the garage, but also damaged the house. In all, the fire caused about $150,000 in damage, Dawson said.

“The house is not habitable right now, and probably won’t be for some time,” he added.

Dawson said early evidence suggests smoking materials may have ignited the fire, but the investigation is ongoing. 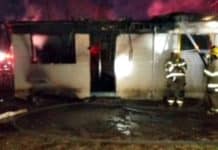