CLEVELAND, Ohio, July 20, 2016 (Gephardt Daily) — Donald Trump staff writer Meredith McIver, who has admitted her role in using passages nearly identical to a 2008 Michelle Obama speech in a speech Melania Trump delivered at the Republican National Convention, is a graduate of the University of Utah, it was confirmed Wednesday.

Communication specialist at the U of U Annalisa Purser confirmed Wednesday afternoon a person by the name of Meredith McIver graduated from the university with a degree in English in 1976.

After two days of denials from multiple Donald Trump campaign officials, McIver released a statement saying Trump’s wife, Melania, had shared with her examples of speeches made by people she admired, including Michelle Obama.

“I wrote them down and later included some of the phrasing in the draft that ultimately become the final speech,” McIver’s statement said.

“I did not check Mrs. Obama’s speeches. This was my mistake, and I apologize for the chaos I have caused for Melania and the Trumps, as well as Mrs. Obama. No harm was meant.”

The speech apparently was not vetted by campaign officials, or similarities were not detected, a fact that gave political commentators a new topic to discuss on Wednesday morning.

McIver said she offered her resignation to Donald Trump, who declined to accept it, saying people make “innocent mistakes” and learn from them.

See the whole statement below: 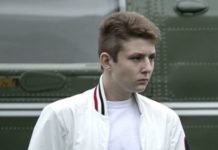