The Highway Petroglyph Site is one of the park’s most visited locations, the National Park Service stated in a news release. The site is located along State Route 24, and is easily accessible to park visitors wanting to view the petroglyphs, the statement said.

“A panel at the Highway Petroglyph Site in the park was defaced on or about July 19, 2016, with the words ‘Ivan Dallas TX,’ ‘Henn/Hena,’ and ‘DALLAS TX,'” the National Park Service statement read. “The writing appears in the dark patina next to the prehistoric images known as the bear and coyote and on top of a bighorn sheep image.”

Terry T. Fisk, chief of resource management and science, said vandalism of this type, besides being illegal, is an assault against a heritage.

“Vandalism of these petroglyphs or any other archaeological feature is desecration of a sacred site,” he said. “These acts violate the cultural heritage of Native American tribes associated with this landscape, and our collective heritage as humans, no matter where our ancestors originated.

“It is heartbreaking to encounter such appalling disregard for cultural masterpieces that should be venerated, and Capitol Reef will be diligent in pursuing restitution.”

Petroglyphs found along S.R. 24 and on the Capitol Gorge Trail were created by Fremont Culture Indians, according to the National Park Service website. Petroglyph panels throughout the park depict ancient art and stories of these people who lived in the area from approximately 600-1300 common era (CE).

Named for the Fremont River that flows through the park, evidence now shows that tribe members lived throughout Utah and adjacent areas of Idaho, Colorado and Nevada.

Acts of vandalism such as these are illegal and are punishable by up to two years in prison and/or a $20,000 fine under the Archaeological Resources Protection Act.

Anyone with information concerning the vandalism is asked to contact the NPS at 435-425-4135 or call the Archaeological Resource Protection Act Hotline at 800-227-7286. 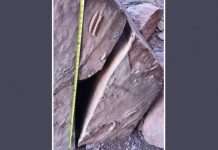