The driver of the car lost control on a curve and the car rolled and entered the river, Street said.

Passersby assisted the occupants of the car from the river, Street added.

When emergency responders arrived, the adult male who had been traveling in the car was not breathing, but he was revived using CPR and was conscious when he was transported.

All four occupants were transported to area hospitals by ground ambulance. Their conditions are not known at this time.

It’s not clear at this early stage who was driving the car.

Street said there was heavy rain at the time of the incident.

UDOT to open two new interchanges, new connection between I-15 and U.S. 89 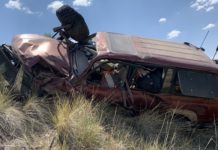