Once at the district level, Vallow Daybell will either plead guilty or not guilty. If Vallow Daybell pleads not guilty, a judge will set a jury trial date. The judge assigned to her case is District Judge Dane H. Watkins Jr.

Since Vallow Daybell waived the hearing, her case moves to the higher court automatically.

Vallow Daybell is facing two felony counts of conspiracy to conceal, alter or destroy evidence in Fremont County. The charges came after the June 9 discovery of the remains of her two children, Joshua “J.J.” Vallow, 7, and Tylee Ryan, 16, buried on the property of her husband, Daybell.

In Madison County, Vallow Daybell is also charged with misdemeanor resisting or obstructing officers, criminal solicitation to commit a crime and contempt of court. She pleaded not guilty to those charges, and a jury trial is set for Jan. 25 to 29 before Magistrate Judge Michelle Mallard. 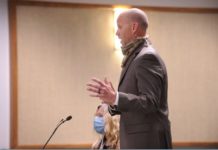