SALT LAKE CITY, Utah, Nov. 29, 2020 (Gephardt Daily) — A 44-year-old man was arrested at Salt Lake City International Airport the night before Thanksgiving because he insisted on boarding a flight without wearing the required face mask.

Joshua Colby Council was boarding a Delta Airlines flight to San Francisco at about 10:40 p.m. Wednesday when he bypassed the Delta gate agent and headed down the ramp to the plane, according to a probable cause statement filed in Salt Lake City Justice Court.

The gate agent followed him and told him he has to wear a face covering because of COVID-19.

“Defendant for unknown reasons refused to obey the gate agent and boarded the aircraft without complying with her request,” the affidavit states.

The gate agent contacted the flight crew about the matter and flight attendants and crew members also tried to get Council to wear a mask.

Instead of complying, the statement says, Council became argumentative and refused. He “took his seat and refused to do anything more.”

The Delta crew, captain, gate agent and a manager all tried to get the uncooperative passenger to put on a mask, but to no avail.

At some point, Delta management “determined Defendant was no longer welcome aboard the aircraft and needed to be escorted off the plane,” so the police were summoned.

Upon arrival, the officers made contact with Council, who was seated on the plane, and explained that Delta management had decided he needed to leave the aircraft. Again, Council refused to comply, the statement says.

“Numerous attempts were made to encourage the Defendant to leave with negative results,” the reporting officer wrote in the statement.

In order to safely remove Council from the plane, all the other passengers — several dozen, according to the statement — had to get off the aircraft first. Once it was empty, Council agreed to walk off the plane.

Council then refused to turn over his identification at the gate and was arrested.

The Delta crew told officers the flight was delayed 45 minutes because Council refused to be compliant.

He was arrested on a charge of disorderly conduct and was then released on condition that he agree to appear at an upcoming court date. 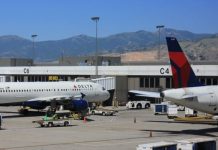 Gov. Herbert on earthquake: Utah ‘all in all, very fortunate’ no injuries reported, damage minimal