PANGUITCH, Utah, Aug. 26, 2016 (Gephardt Daily) — The National Weather Service out of Salt Lake City says a tornado touched down in Southern Utah at about 1:20 p.m. Friday.

The twister was first spotted about six miles south of the town of Panguitch, where it was photographed by a number of eyewitnesses, including Garfield County Sheriff Danny Perkins.

“It was cool to watch, it really was,” Perkins told Gephardt Daily. “I actually phoned some of my friends, and they could see it from Panguitch.”

Perkins said from his vantage point, he never saw the funnel cloud touch down.

“It got close,” he said. “You could see the clouds spinning around in a circle. We (Perkins and a deputy) sat and watched for 6, 7, 8 minutes, 10 minutes maybe. I’ve seen other tornado clouds like that before, but I’ve never seen one that was this large, this long, or this close to the ground.”

Perkins said the funnel cloud wasn’t threatening anything. It was over the mountains, which might be better described as rolling hills, he said. That area is not populated, he said.

“Some cars pulled over, off Highway 12, and watched it with us,” Perkins said. “It was raining really hard in Panguitch at that time, so I think most people weren’t outside in the elements to see it. They were probably indoors, hunkered down. It was wild for a minute there.”

Then Perkins laughed, and referenced a classic tornado film set in Kansas.

“I was a little worried the Tin Man might fly by.” 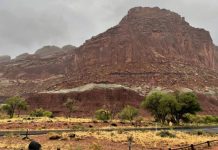