LITTLEFIELD, Arizona, July 24, 2022 (Gephardt Daily) — The family of a missing Layton man say they suspect foul play after his truck was found at a gas station near the Utah-Arizona-Nevada border Sunday morning.

Beau Riddle, 49, has been missing since Friday after he delivered a fifth-wheel trailer in Littlefield, Arizona. Riddle was scheduled to deliver another trailer in Idaho on Friday when he told his employer he was having a “nervous breakdown” and engine problems from heat.

Farm Boy Towing manager Adrianne Nelson said Riddle’s last text messages were about having a “nervous breakdown,” the release states. Nelson said she lost contact with Riddle at 4:46 p.m after making hotel arrangements for him and scheduling another driver to pick up the trailer.

“I’m confused and heartbroken for his family,” Nelson said. “I want him to be found safe.”

The Mohave County (Arizona) Sheriff’s Office is using tracking dogs to locate Riddle after a helicopter search was hampered by thick brush, according to the news release. The trailer Riddle was towing was found Saturday, and the truck was located Sunday after law enforcement received tips on social media, the release states.

Layton police entered Riddle into a national missing person database and sent out an attempt-to-locate request to law enforcement in Utah, Arizona and Nevada, according to the news release.

Kim Riddle said her husband had been very upbeat all week, the news release states. The father of six was excited about how his new truck hitch was doing such a good job and that his new Arizona license plates matched his truck, she said.

Riddle is described as 5 feet 6 inches tall, 240 pounds, with brown hair and a closely trimmed beard. His orange Dodge Ram has “Farm Boy Towing” painted on the side, with Arizona license plate No. AL24865, police said. The truck was pulling a white Rage’N fifth-wheel trailer with blue striping. 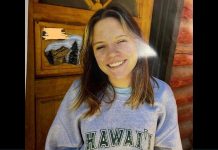 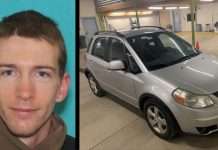