A cruiser noticed the fire and called it in, Sandy City Fire Battalion Chief Chris Aston told Gephardt Daily. Sandy Fire crews were dispatched at about 5:15 a.m. to the blaze, at 9682 S. Eastpoint Drive. (1485 East).

“On arrival, it was a fully involved house fire,” Aston said. “We fought it defensively, due to the involvement with smoke and flames. There were two occupants, and they got out safely. One had minor burns, and was transported to the hospital to be checked out, then was released.”

Aston said officials are still trying to determine the source of the fire.

“One homeowner reported he had a heating source in the basement, and possibly kicked it over,” Aston said. “We are still looking into it.

“We haven’t been able to get into the home yet due to the involvement and the integrity of the structure,” Aston said at 10:30 a.m. “We are working with boarding companies to get it shored up so it doesn’t come down on us.”

Crews are also on scene to make sure any flare ups are extinguished, but Aston said the fire is considered to be out.

There’s no dollar amount yet attached to the damage done by the fire, but Aston said the house is a total loss. 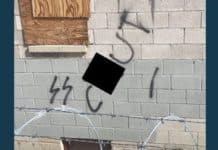