Zach Haumesser, a Buffalo, N.Y., native, offered a special Bugs Bunny shout-out to the Utah Valley University men’s soccer team, who were traveling on the plane.

“This is just one of the million reasons why I LOVE my job,” Elizabeth wrote on Facebook. 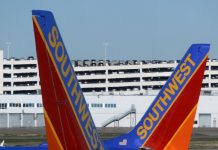