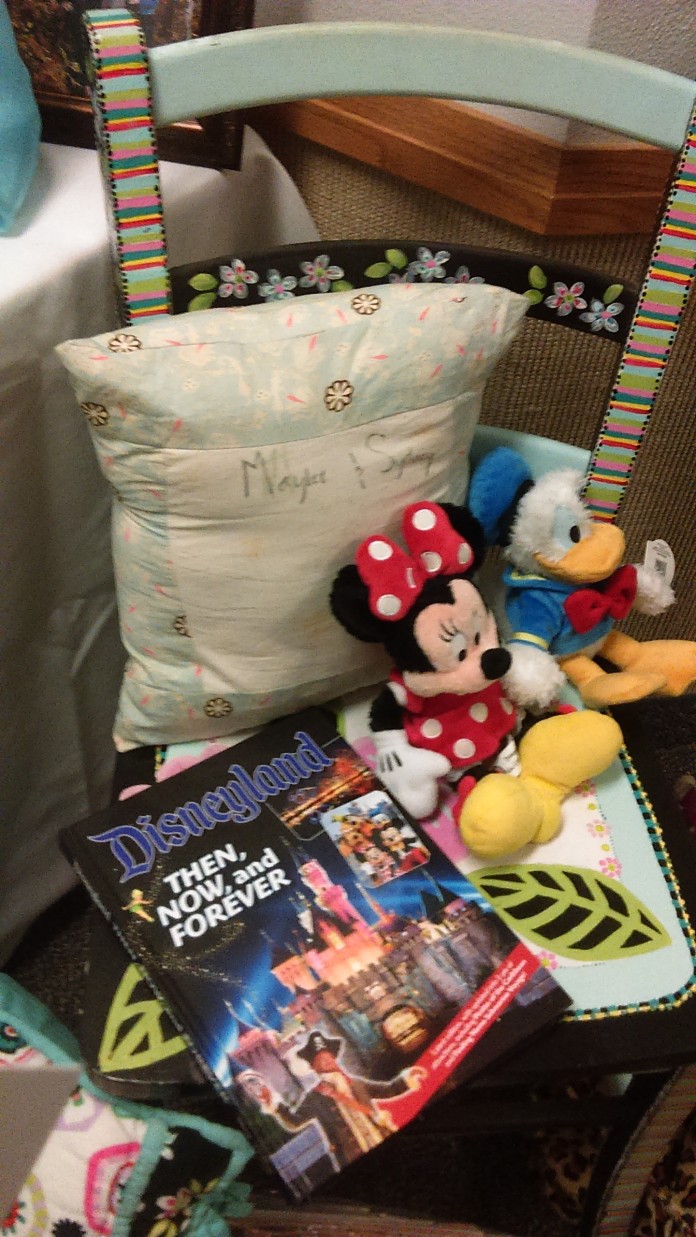 HIGHLAND, UTAH – June 5, 2015 (Gephardt Daily) – Sixteen-year-old Maylee Anderson’s casket was custom painted to match her bedding and the color her dad painted her room. And on the head panel piece of the casket, her signature was embroidered. Her name was found by her dad in Maylee’s journal, along with the entry: “If I was famous this would be my signature!”

Maylee, whose family called her their miracle, passed away after a car accident in Utah County Memorial Day.

The former Lone Peak High School student, who was born in Mesa, Arizona on February 11, 1999, died at Utah Valley Regional Medical Center Friday, May 29 at 11:45 a.m.

Lone Peak officials said Maylee and her mother Christine were attempting to turn onto Highland Blvd from 11800 N. when they pulled in front of a northbound Jeep Wrangler.

An anonymous donor paid for Christine to be transported to the same hospital as Maylee, where they were reunited before the teen died.

Her family painted a picture of a bubbly, giggling girl who loved glitter, fashion and bedazzling. But along with her outgoing nature came intelligence, tenderness and introspection, a profound love for those around her, God and even those she didn’t know; Maylee made the decision to be an organ donor.

Maylee’s pallbearers were her uncles, while her cousins were honorary pallbearers. Her uncles and cousins also sang for her; “I Feel My Savior’s Love” and “I Know That My Redeemer Lives.” Other hymns sung by the 500 mourners that attended were “There is Sunshine in My Soul Today” and “Families Can Be Together Forever.”

The service began and ended with prayers by Maylee’s grandmothers, while her brother Benjamin painted a tender portrait of his younger sister who he called “much smarter” than him. “She loved anything to do with fashion, glitter and being fabulous,” he said. “Maylee loved everyone. A day with her meant you were going to have fun, whether you wanted to or not.” He said his sister’s core beliefs were to love everything, everyone and stop at nothing to achieve your divine purpose. “Maylee was the brightest part of our home,” he added. “She was our miracle and she was a miracle to others.”

Her grandfather, Kent L. Olsen, said in his speech: “It has been very difficult losing our beloved granddaughter but the blessing is we will only be separated for a short time.”

Her dad Stuart spoke of the time since the accident, saying they had been surrounded by family, friends, neighbors, old missionary companions. “As a father,” he said, “I never left Maylee’s side. They were hoping for a bit of improvement each day.” He read an entry from Maylee’s diary where she talked about her great love for her mom and family. He also read a list of Maylee’s attributes written by the young women in her ward, including that she was non-judgmental with a happy disposition, agreeable, and always seeking wisdom and learning even at the tender age of 16. “I remember what a big piece of the puzzle she’s been,” he said.

Bishop Sean K. Brown, who initiated over the funeral, said Maylee was special, that she consistently loved God and her neighbors. He recounted a tale in which he and his wife went to pick up Maylee and their own daughter at Walmart around 10:45 p.m. one night. He remembers waiting outside with his wife when suddenly Maylee and her friend emerged, riding motorized scooters. “She was laughing so loud,” he said. “She was bigger than life. She loved to have fun, she loved people. She was infectious, she made you want to be a better person.” He also showed a tithing envelope which was found in Maylee’s room, which she intended to donate before the accident.

Brown said he was finding peace in the idea that Maylee is now free. “She is probably up there now giggling about something and bedazzling something,” he said. “She lives. This young lady was the best of us.”

Elder Craig B. Terry, who presided over the funeral, said: “We have hear some beautiful accounts of the Christlike gifts Maylee was blessed with. I feel that the heavenly Father has a special place in his heart for all of his daughters. Maylee is your daughter and she’s your daughter forever.”

In lieu of flowers, the Anderson family requests that donations be made to The Huntsman Cancer Institute, since some of Maylee’s family members have had cancer. Condolences to the family may be extended online at www.bergmortuary.com.