Navid Monjazeb, 37, who admitted guilt as part of a plea deal that lessened charges, was sentenced this week to:

A plea deal allowed Monjazeb to admit to reduced charges: four counts of wrongful appropriation, a third-degree felony. Once restitution is paid, the Utah Attorney General’s Office has agreed to reduce those convictions to misdemeanors.

Monjazeb was charged in January of 2016 with:

According to a probable cause statement, Monjazeb was charged after investigators noticed a pattern of similar accidents and circumstances. In many cases, victims reported they were changing lanes when the defendant’s vehicle came in contact with their rear side panel, resulting in minimal damage.

“However, most victims related the same narrative, that the defendant’s vehicle was not near them and then suddenly he would move his vehicle forward as they attempted to change lanes, resulting in the accident.”

Between January of 2010 and December of 2015, the 22 accidents were reported. Photos sent to insurance adjusters often depicted far more damage than was done at the accident scene, the statement said. 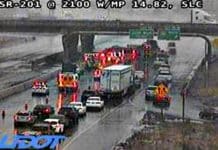