“At approximately 4:16 a.m., several suspects attempted to steal the ATM from Wells Fargo Bank,” a statement from the Hurricane Police Department says. “The suspects used a stolen truck, trailer and heavy equipment in an attempt to remove the ATM.

“The suspects fled the scene and crashed the vehicle a short distance from the bank. Officers searched the area on foot and with K9s, but were not able to locate the suspects.”

The truck, trailer and other heavy equipment were stolen from the Hurricane area during the night.

“All of these stolen items were recovered at the crash scene and have been returned to the owners.

“The ATM was not able to be removed by the suspects and was left at the scene. The building and ATM sustained several thousands dollars in damage. The investigation is ongoing and detectives are following several leads.” 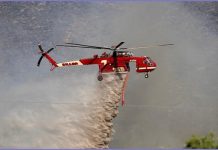