NEPHI, Utah, April 6, 2016 (Gephardt Daily) — A Juab County man has been arrested on charges of animal cruelty after he reportedly tortured a horse owned by his then employer, Young Living Farms.

Freeman Yoder, 38, was fired immediately after guests and employees witnessed the April 1 incident, and recorded video. The video reportedly showed Freeman pulling a draft horse behind a truck until it dropped to the ground, then he continued pulling the animal toward the barn after it would not stand up.

Herb farm employees called the Juab County Sheriff’s office with a “keep the peace” request after firing Yoder over the incident, and asked officers to stay until Yoder left the premises.

“After my arrival, they had reviewed videos that had been provided to them by wittness (sic) who had taken video of Freeman pulling a draft horse behind a truck to the point it dropped to the ground. After dropping to the ground, he (Freeman) continued to pull the horse back towards the barn, after coming to a stop the horse would not get up.

“Freeman attempted to get the horse back to its feet for some time, when the video ended the horse had still not got up to its feet.”

Employees advised Ryan that the video only showed the third time in the incident that the horse had been dragged.

A charging document added that Yoder “… tied a draft horse to a truck and drove the truck faster and faster until the horse fell to the ground and was drug along the ground behind the truck by its head and neck.”

Yoder allegedly stopped, got the horse back on its feet, then sped forward again “… until the horse fell against the back of the truck, hitting its head on the truck and denting the truck.”

Yoder allegedly continued dragging the horse by its head and neck until it fell again, then stopped to get the horse back on its feet.

Yoder reportedly started driving fast for a third time. When the horse fell again, Yoder dragged it, according to the charges.

Young Living Farms, which grows lavender and hosts community and private events at the Mona location where the incident occurred, released the following statement on the case:

“We are fully cooperating with the Juab County Sheriff’s Office and will press charges to see that this individual is prosecuted to the full extent of the law,” the statement said.

“Young Living has strict policies around animal care, and condemns any animal mistreatment or abuse.”

Young Living Farms’ Mona location has nearly 1,400 acres of herbs, and is open to the public all year, the company website says.

Yoder is scheduled for an April 12 court appearance. 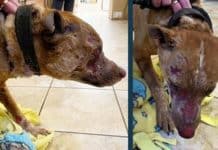