WASHINGTON COUNTY, Utah, June 16, 2019 (Gephardt Daily) — A LaVerkin man is in jail after he allegedly stabbed his neighbor’s dog and then used the knife to stab his neighbor in the head and neck.

Christian Logan McKusick, 27, was arrested Saturday afternoon and is facing charges of:

According to a probable cause statement filed in 5th District Court in St. George, a police officer responded to a report of a stabbing and arrived to find the victim bleeding from the head and neck, and large amounts of blood outside and inside the home.

The victim told the officer that McKusick had stabbed him and the dog.

The incident apparently began when the dog sniffed McKusick and McKusick’s wife, who were on the front porch. McKusick reportedly said something, and the victim told him not to touch the dog.

McKusick then allegedly pulled out a knife that had a 4- or 5-inch blade and stabbed the dog.

The victim said he pushed McKusick up against the wall, and McKusick “came straight down on his head with the knife.” The victim said McKusick then stabbed him in the neck, according to the probable cause statement.

The victim was immediately transported to the hospital because of the seriousness of his injuries, the statement says.

The dog was “severely bleeding from the neck area,” and required emergency veterinary care, the officer wrote.

McKusick took the knife and fled right after the alleged assault, according to the statement. He was located two streets away by a Hurricane police officer who took him into custody.

At the LaVerkin Police Department, McKusick was read his Miranda rights and was interviewed by Chief Lee.

McKusick told Chief Lee that he and his wife had been out on the porch smoking cigarettes and that the victim, who lives in an apartment behind the residence, had called him a derogatory name.

According to the statement, McKusick said the victim passed by him a few more times, calling him names, which escalated the situation.

“McKusick explained he punched (the victim) a few times and then (the victim) punched him in the back of the head and in the ribs,” Lee wrote.

McKusick then told Lee he broke the fight off and ran away by jumping over the fence.

When Lee asked where the knife was, McKusick said there was no knife. He later admitted that he threw it on the ground, the statement said.

Lee noted other examples of conflicting information that McKusick put forth during the interview.

A warrant to search the property was approved and officers went to the residence, where they found several knives in McKusick’s room. According to the probable cause statement, McKusick is a convicted felon and went to prison for robbing a store in LaVerkin, so he is restricted from possessing a weapon.

McKusick was transported and booked into the Washington County Jail.

“Due to the injuries and the individuals living on the same piece of property,” the charging document says, the on-call judge authorized a $25,000 cash only bail. 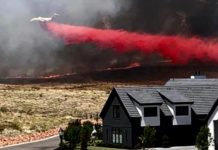 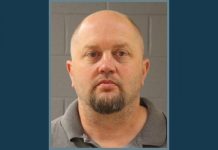 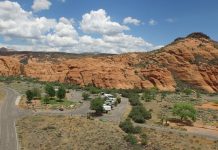