According to Sgt. Spencer Cannon of the Utah Highway Patrol, the 23-year-old BYU student from California suffered from an undisclosed medical condition while she was hiking in American Fork Canyon.

“We sent Search and Rescue, medical, and LifeFlight in response to the call and found the hiker was in an area that was difficult for us to reach,” Cannon said. “A second LifeFlight bird, with a hoist, was required to to get the woman off the mountain.”

Cannon said the woman was taken by ground ambulance to the hospital once LifeFlight was able to take her off the mountain.

Further information about the condition of the woman was not available. 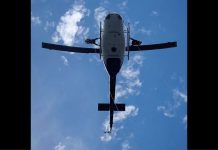