A probable cause statement from the 1st District Court of Cache County said Charles Allan Olson, 43, is facing charges of:

The Cache County Sheriff’s Office received a child abuse neglect report from the Department of Child and Family Services. The report alleged physical abuse towards six minor children by Olson. Interviews with the children, who are between 5 and 16, were set up at the Children’s Justice Center in Logan.

One victim, a 9-year-old male, told police that all six children got spanked except the youngest, a 5 year old.

Another victim, a 10-year-old boy, said Olson also had a bamboo stick, that on one occasion “snapped in half because Charles was hitting so hard,” the statement said. “He then went on to describe another stick that is called the solid truth. He stated that it is thick wood so it won’t break and is kept in Charles’ room.” He also described a stick covered in black tape. He stated that Olson has hit him on his buttocks and on his back, since he was 7 or 8 years old.

Another victim, a 12-year-old girl, said Olson “tied her to a bar stool in the garage,” the statement said. When asked to describe this she stated that he used a paracord that he uses to make whips. She stated that Charles would tie her hands to the bottom of the stool on one side and her feet to the bottom on the other side forcing her to bend over the stool and that he did this to keep her still while she received her spankings because she would not hold still.

Another victim, a 14-year-old girl, said that if the children moved the spankings would start over and that they could receive up to 50 spankings at one time. She stated that they would leave marks and bruises.

Olson was interviewed at Cache County Sheriff’s Office Friday. After being read his Miranda rights, he admitted that he knew what he had done was wrong. He allegedly admitted to hitting the victims with sticks, and said it could be accurate that he hit them up to 50 times. He admitted that he could have left bruises or red marks on five out of the six victims in this case.

He was transported to Cache County Jail, where he is being held without bail. 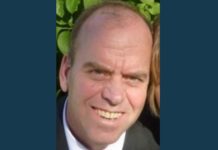