OGDEN, Utah, Oct. 17, 2020 (Gephardt Daily) — A 25-year-old man was transported to Weber County Jail on Friday night and is facing a felony charge after police responded to a reported “burglary in progress” at Key Bank.

The incident began at about 10:12 p.m., when police received a call that a man was seen breaking a window and entering the bank at 2491 Washington Blvd., Ogden Police Lt. John Cox told Gephardt Daily.

Multiple police cruisers responded, and several officers went into the bank while others  maintained a watch outside.

Lt. Cox said the suspect was located and was taken into custody without incident. He was then booked into jail on suspicion of felony criminal mischief (due to the amount of damage to the bank’s double-paned window) and a charge of misdemeanor criminal trespass.

The suspect declined to talk to police, Cox said. 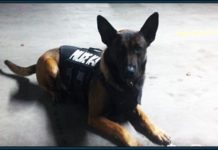