SUNSET, Utah, May 18, 2022 (Gephardt Daily) — A man is dead after being hit by a FrontRunner train Wednesday morning in Sunset.

The incident happened at about 5:30 a.m. at near 2300 North and 475 West, according to Utah Transit Authority officials. A bus bridge was activated between Clearfield and Roy stations until the track could be reopened.

Utah Transit Authority spokesman Carl Arky said the victim, a man of 49 or 50, was trespassing in an area behind a fence that blocks track access, and was not at exact intersection of the tracks and roadway.

“It appears to have been be intentional,” Arky said. 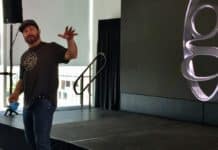