LAYTON, Utah, Feb. 16, 2020 (Gephardt Daily) — A man was transported to an area hospital after the Jeep he was driving collided with a building in Layton early Sunday morning.

The driver, who was travelling at a high rate of speed, failed to navigate a curve in the road, crossed into the opposite lane and collided with the building, officials said.

No one was inside the building at the time.

The driver, who is 26, climbed out of the Jeep and was transported to an area hospital. His condition is not known at this early stage, officials said.

He was the only occupant of the car and no other vehicles were involved in the crash.

It is believed that alcohol was a contributing factor in the accident and the man has been cited for DUI. 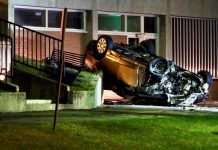