SALT LAKE CITY, Utah, July 22, 2022 (Gephardt Daily) — Police called in the bomb unit out of an abundance of caution Friday to remove a military-grade device found in a storage unit.

Salt Lake City police responded just before 11 a.m. to the report of the item a woman found in her recently purchased storage unit near 700 North Warm Springs Road, according to a department press release.

Officers secured and cordoned off the area. The on-scene incident commander then requested the assistance of SLCPD’s Hazardous Devices Unit (HDU).

Detectives with the HDU team safely took the item into their possession for further investigation. It was described as an inert military-grade training device.

“As a reminder, if you see anything that looks suspicious, do not touch or pick up the item,” SLCPD advises. “Call 911 and follow instructions from the dispatcher.”

The department’s HDU is a member of Utah’s statewide Bomb Response Task Force and is accredited by the FBI, according to the release. In addition to members from the department, the unit is supported by FBI-certified bomb technicians from the SLCPD’s Airport Division and the University of Utah Police Department.

Members of the squad are very experienced with live incidents and have extensive training in “render-safe” procedures, explosive destruction, blast mitigation, and post blast investigation. 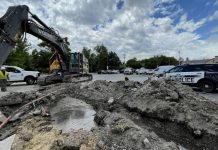