MILLCREEK, Utah, Oct. 30, 2019 (Gephardt Daily) — A Millcreek woman has been arrested after she allegedly falsely reported an active shooter in her apartment.

A probable cause statement from the 3rd District Court of Salt Lake County said Audra Marie Hanks, 39, is facing charges of false emergency report– emergency involving injury/death, a third-degree felony, making a false alarm alleging an ongoing imminent threat, a third-degree felony and false information given to law enforcement, a class B misdemeanor.

On Monday at 8 p.m., a woman called 911 reporting an ongoing and active shooting, including her and kids being shot by a specific male suspect. She reported the shooting was occurring at an apartment in Olympus Ridge Cove.

“Upon entry into the apartment, a female named Audra Hanks was found as the caller,” the statement said. “There was not a shooting of multiple suspects, nor had she been shot or injured. She stated she had called 911 for help, and that reporting her and others being shot would get her help.

“The report by Hanks caused a response of several law enforcement from several precincts, as well a fire/medical response, for the claim of several people being shot.”

This also put the general public in danger as officials were responding believing there was an active and imminent threat to lives resulting in death, the statement said.

“Hanks was confirmed to be the only person in apartment,” the statement said. She does not have a husband/boyfriend or kids, which was confirmed by no pictures or clothing reflecting any significant other or children.”

Hanks “admitted to having a mental diagnosis, for which she is not taking medications nor
following a treatment plan,” the statement said. She also admitted to self-medication using cannabis products.

She was booked into the Salt Lake County Jail without further incident, with her bail set at $10,480. 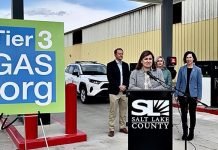