The bridge spans the Utah Transit Authority and Union Pacific railroad tracks, as well as the Jordan River, making it one of the longest and tallest of its kind in Utah, according to a news release from the Utah Department of Transportation.

“With this project, we’ve built a new connection in our transportation system that can be used by anyone — whether they’re walking, riding a bike or in a car,” UDOT Executive Director Carlos Braceras said. “This will help people in southern Salt Lake or northern Utah County travel where they want, when they want and how they want.”

“The city of Bluffdale’s motto is ‘Life Connected,’ and that is what this bridge will do for us,” Bluffdale Mayor Natalie Hall said. “It will finally connect our east and west side. It will connect businesses. It will connect neighbors and students going to school. This bridge is historical for our city and will bring great economic opportunity as well.”

Porter Rockwell Boulevard was constructed in phases over the past decade to meet the transportation demands of Salt Lake and Utah counties, two of the fastest-growing counties in the nation, according to UDOT.

Completing the bridge was the final phase of the joint project from UDOT and Bluffdale. 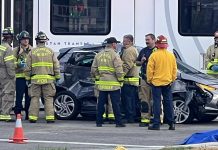 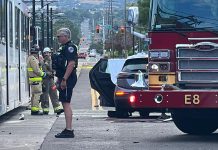