The article, published Sunday, quotes Gov. Gary Herbert as saying: “Let’s not be coy about this,” to close Romney friend and prominent business leader, Kem Gardner. “If he’s going to run, let’s go. If not, we need to find somebody else to run, and there’s people that have been trying to queue up for the opportunity.”

Gardner reportedly then called the governor and read from a text that Romney had sent him that said: “I’m running.” And it’s safe to assume he wasn’t talking about taking a jog.

Romney, who has a home in Holladay and is a member of The Church of Jesus Christ of Latter-day Saints, is being widely encouraged to run for Hatch’s seat this year. Hatch, who has served as a U.S. Senator since 1977, announced Jan. 2 he would retire from the Senate.

A White House official confirmed to CNN that Romney has spoken to President Donald Trump over the phone about the possibility of running, but details of their conversation have not been released, the cable news network reported.

Romney was also in the news last week as it was revealed he was treated for prostate cancer over the summer, CNN reported.

A source close to Romney, 70, told CNN he was treated surgically by Dr. Thomas Ahlering at UC Irvine Hospital in California, that the treatment was successful and his prognosis is good. 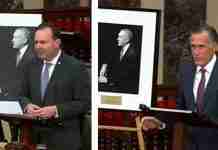