“Citizens in the area reported shots fired,” the news release said. “There was a party at a nearby residence and unknown persons showed up at the party and a fight broke out. As a vehicle left the party, shots were fired.”

Other Stories of Interest:  Mike Bloomberg to campaign in Salt Lake City Thursday

Officers responded to the area and found shell casings near the address in question. No injuries were reported.

To share information about this incident with the SLCPD, call 801-799-3000. To remain anonymous, text crime tips to 274637. Start the text with the keyword TIPSLCPD (which routes it to SLCPD), then a space, followed by the relevant information or photos. Reference: crimetip. The reference number in this case is 19-65026. 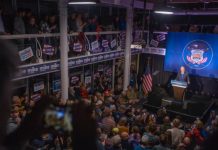