MIDVALE, Utah, Feb. 8, 2017 (Gephardt Daily) — The Unified Police Department is asking for the public’s help in identifying a suspect who robbed the Jordan Credit Union.

The suspect was last seen running west on Center Street. He is described as being 6 feet tall and having short black hair. The suspect was wearing a red shirt, jeans and a camouflage baseball cap.

UPD Violent Crimes detectives are asking the public to help identify the man in the pictures. Anyone with information is asked to call 385-468- 9819. 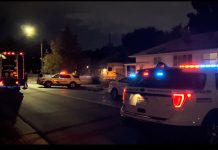