SALT LAKE CITY, Utah, Sept. 15, 2018 (Gephardt Daily) — The Salt Lake Tribune has placed one of its best-known columnists on unpaid leave after a review of his treatment of a blogger at a Utah conference they both attended.

Robert Kirby is on three months of unpaid leave after the Tribune investigated his behavior toward Utah County blogger Courtney Kendrick at a conference in Sandy, hosted in July by the Sunstone Education Foundation.

“The very first thing he said to me when we were alone in the convention center hallway was, ‘Let’s pretend I picked you up from an escort service and we’ll walk over to that table over there together and sit down and chat,'” Kendrick wrote.

“I was there as a colleague and fellow writer, and he didn’t know me at all. And wasn’t he supposed to be the guy who we could be safe around? The progressive man with the newspaper column we all love, right?”

Kendrick wrote that Kirby offered her a marijuana edible, which she felt pressured to accept due to his celebrity status. Then, without her permission, he announced to conference participants that she was “high.”

“I was then completely blindsided when he proceeded to tell everyone in our session later on that I was high, because he — the great Robert Kirby — gave me weed,” Kendrick wrote.

Kirby apologized Thursday on his Facebook page, saying he misjudged how Kendrick would respond to his sense of humor. His account has since been deactivated.

“Sunstone was recently made aware of an incident where Robert Kirby, who was one of our final presenters, made a comment in a private conversation that violated our anti-harassment policy at the 2018 Salt Lake Sunstone Symposium.

“All presenters are made aware of our policy against harassment. We have since communicated with all parties, and the Sunstone Board has decided that for the foreseeable future Mr. Kirby will not be invited to present at future Sunstone events.”

“After researching multiple complaints, we found that Kirby’s conduct has not been in compliance with Tribune policy. However, we’re implementing steps to prevent this behavior in the future,” she wrote.

“We believe that Kirby’s agreement to suspend employment, undergo coaching and attend training reflects his sincere commitment to change. He has been an important contributor to the Tribune, and we believe he can be again.

“During its 147-year history, the Tribune has strived to hold itself and others to the highest standards of integrity, professionalism and respect for the truth. We will continue to do so.”
Her statement also included a section from Kirby, which did not mention Kendrick by name.

“I’m profoundly sorry that my actions have offended people in the community,” he wrote. “I have a lot of work to do in understanding the pain I have caused.

“After discussing my conduct with Tribune management, I am more aware of the consequences of my actions and I will be undergoing training and counseling to become a better person.”

“As I’ve said all along, my posting was never about apologies or punishments, it was about making my community aware of problematic behavior by so-called progressive men. I hope good comes out of this — that more women can find their voices when it matters most.

“I also hope men reconsider their reactions to women when they tell the truth. It’s not a joke and it’s not entertainment. These are our voices and they won’t be silenced anymore. I’m out.” 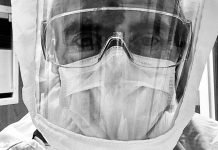