KAYSVILLE, Utah, Sept. 6, 2018 (Gephardt Daily) — Popular Utah TV news personality Casey Scott has been arrested and charged with driving under the influence after being involved in an injury accident Monday in Davis County.

Scott, 44, was approaching an intersection at U.S. 89 and 200 North in Kaysville just before 2 p.m., when, according to a probable cause statement filed in Davis County Justice Court, he “left his lane and swiped a vehicle causing him to lose control, running a red light and colliding with another vehicle in the intersection.

“There was an odor of an alcoholic beverage coming from the suspect,” the probable cause statement says, adding that “three open containers of beer were found inside the vehicle.”

Scott and the driver of the car he allegedly hit were taken to a local hospital for treatment of minor injuries. It was there that arresting officer Utah Highway Patrol Trooper Ruben E.  Correa says he determined Scott had been driving under the influence.

“At the hospital, I attempted Standard Field Sobriety Tests. I saw clues of impairment and arrested the driver for DUI,” Correa wrote.

This is not the first time Scott has been arrested on DUI-related charges. Court records show that in 2015 he pleaded no contest in Summit County to a class B misdemeanor charge of impaired driving. He was sentenced to probation for a year, including public service. He was also ordered to spend one day in jail.

“We obviously do not condone driving under the influence, and see it as a serious public safety issue,” Vea wrote. “Three of our stations run campaigns aimed at safety on the roads. That said, this is a personnel matter. We are currently gathering information and assisting our employee.”

Scott’s next court appearance is scheduled for Oct. 22 in the Davis County Justice Court. 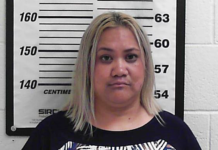 Pickup truck traveling 100 m.p.h. strikes construction workers on 1-15 near Clearfield; driver to be charged with DUI