CNN Senior Congressional Correspondent Manu Raju tweeted: “Mitt Rommey told me he already voted in the elections but he wouldn’t say if he voted for Joe Biden or wrote someone else in. ‘I did not vote for President Trump,’ he said.”

Late last week, Romney said he intends to vote to confirm Judge Amy Coney Barrett to be an associate justice of the U.S. Supreme Court.

Romney said in a statement Thursday: “After meeting with Judge Barrett and carefully reviewing her record and her testimony, I intend to vote in favor of her confirmation to the Supreme Court. She is impressive, and her distinguished legal and academic credentials make it clear that she is exceptionally well qualified to serve as our next Supreme Court justice. I am confident that she will faithfully apply the law and our Constitution, impartially and regardless of policy preferences.”

The Senate Judiciary Committee is scheduled to vote on Barrett’s nomination on Thursday, and a vote by the full Senate will likely take place on Monday, Oct. 26. 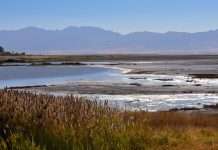